Below are some recent videos that I shot and/or produced or edited.

This video was shot for ESPN at the beginning of the 2016 NFL season on location in Montreal with Laurent Duvernay-Tardif. Tardif is a professional football player for the Kansas City Chiefs but also is also in his final year of medical school. I shot all the video of Tardif, and the incredibly talented video editing staff at ESPN produced the piece.

Below are a few projects and videos that I accomplished with some of the best photojournalists in the business while I was serving as the director of photography at The Hartford Courant. My role in the works below was either producing, executive producing or video editing, or a combination of the three.

“Raising Evan” - Ten-year old Evan Marcantonio has autism. Like most families battling to raise a healthy and happy child, his mother, Carol, needs to be his fiercest advocate. Cloe Poisson did an amazing job gaining access to the family and schools to show our readers the struggle these families endure. This was a special project consisting of both still images and video. Cloe Poisson shot all of the video and photograhs for this award winning piece. My role was the photo editor, video editor and producer. I worked with our talented web master Tim Reck to design the piece for the web and our director of graphics, Chris Moore, to design the newpaper edition. CLICK HERE : http://projects.courant.com/raising-child-autism/

“Pets for Vets” - To help veterans battle PTSD, a new program seeks to help them deal with their problems by forming a bond with trained dogs. Lauren Schneiderman brought this story to my attention and developed it into an award winning piece. CLICK HERE: http://www.courant.com/health/84991203-132.html

“Dancing Crossing Guard” - In a town still healing from a massive trauma, a Newtown school crossing guard makes people smile with her dancing traffic direction. Cloe Poisson spent only a few days with this remarkable woman to produce this widely circulated video.

“Inside Look at High School Football” -  During the 2015 high school football season, a few coaches granted the Hartford Courant access to their teams for an inside look into the high school game. Deputy Sports Editor Jeff Smith and I worked together to see it through to production in print and online. Because of the scope of this project it required the combined efforts of staff and freelance photogrpahers to comlete. John Woike,  Mark Mirko, Patrick Raycraft, Brad Horrigan Peter Casolino and Johnathon Henninger worked on shooting the video. John Woike did most of the video editing with the help of Mark Mirko. I also helped in some of the editing and as executive producer. The entire piece was a bit longer than our readers normally had the patience to watch, so we decided to break the series down into three parts:

When Katharine Hepburn's Old Saybrook summer home was put back on the market, Hartford Courant reporter Ken Gosselin, designer Greg Harmel, and I were allowed a two-hour tour. I was allowed to photograph the home, but there would be "no video allowed." The home was purchased from the Hepburn estate by New York Developer Frank Sciame, and he completely renovated the property to make it suitable for a lifestyle more fitting for 2011. Real Estate agent Colette Harron led the tour. This video was made from those still photographs, after Harron agreed to allow the still images to be used for the video. After seeing the images, she even agreed to be recorded while describing the photos. During the tour, I was able to make a series of panoramic photographs which I then stitched together for use in the video. Copyright Hartford Courant

In the thick of negotiations between the State of Connecticut and the unions, Larry Dorman Public Affairs of AFSCME, and Matt O'Connor, spokesman for SEIU and SEBAC, found themselves under intense media scrutiny. Hartford Courant political writer Christopher Keating met with both to get a better understanding of them and their story.

This video was shot, edited and transmitted back to The Hartford Courant for the website as part of the coverage of the 2008 presidential campaign of Chris Dodd. Reporter David Lightman and I followed Dodd, his family, and singer/songwriter Paul Simon for a few days as Connecticut's senior senator moved to Iowa to make his case to the nation. Copyright Hartford Courant.

After Barack Obama was elected president, The Coffee Trade, located in Avon, Connecticut, decided to create a coffee flavor based on his ethnic heritage. The coffee blend was a big hit for the store, who said Republicans and Democrats both agreed the coffee was the perfect blend.

This video was produced for a story in The Hartford Courant about the disappearance of square dance associations in the state over the past few years. A young "caller" was trying to bring some youth back into the mix, as he became a very hot commodity in what is typically an older man's game. Copyright The Hartford Courant. 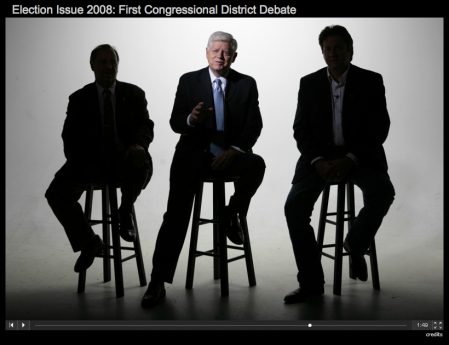 In covering the 2008 election for the First Congressional District, The Hartford Courant held a debate in the Hartford office. Green Party candidate Steve Fournier, Republican candidate Joe Visconti,  and Democratic candidate U.S. Representative John Larson took part in the debate by Courant columnist Rick Green. Michael McAndrews and I worked on the photography, while I edited the entire debate down to a seven-minute piece for distribution on the web, and for mobile devices. Please click here to see the web video, and click here, to download the iPhone podcast. 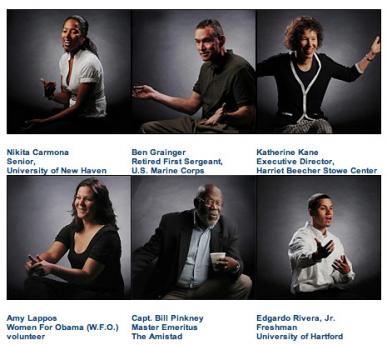 During the last Presidential election, Courant photographer Patrick Raycraft and I worked together to photograph and interview Democrats and Republicans about why they liked their candidates. Click here to see the six separate interviews and slideshows of the Democratic voters.